A kinky age-gap romance between a daddy and his boy.

it started with a kiss.

Though our collab projects feature characters from my comic “Frantic Live” and Ryn’s “The Perfect Boyfriend” series, they happen separately from either of them. As such, many details deviate from the source material, such as backstories & plot lines.

Mitch moved in next to the Davenports following a break-up with his former girlfriend Mary. Bringing along his Belgian Malinois Jamie, he purchased his first ever home in need of renovations.

In his late teens and early twenties, Mitch used to be in a band called Frantic. However, the band never took off and remained more of a hobby project than anything else. Mitch, always the free spirit, never attended college. He went into the trades and became a carpenter. 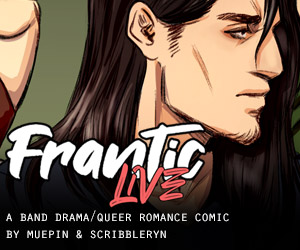